A Paper Monument for the Paperless 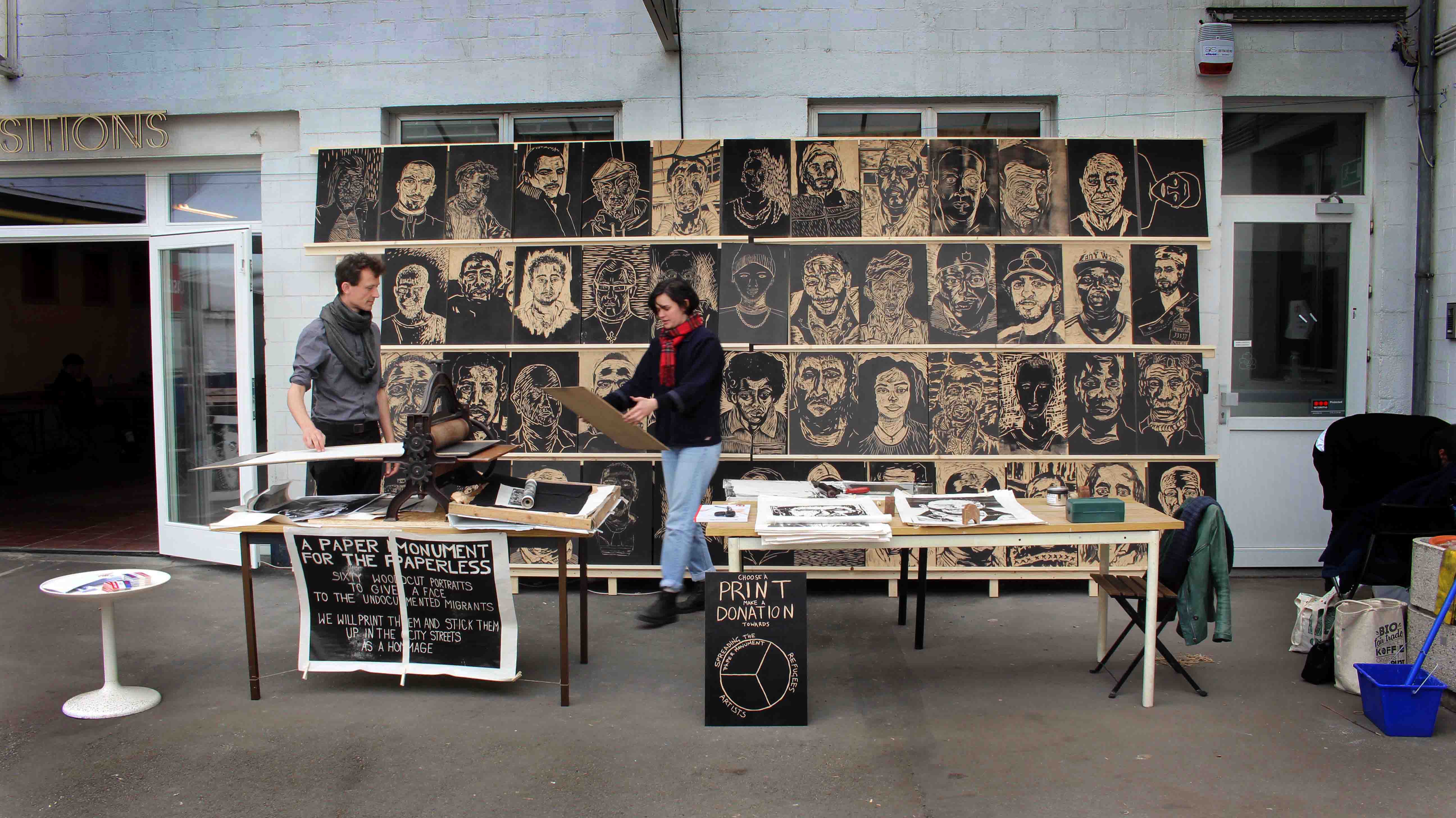 Wanted: street artists, activists, civil-disobedient and cheerful wheatpasters for the raise of “A Paper Monument for the Paperless”.

A Paper Monument for the Paperless’ is a monument in the making, which should generate more visibility and attention to undocumented refugees. Anyone can make a contribution by requesting an A2 size poster set (in the form of a newspaper with 31 woodcut portraits of these refugees, made by a diverse group of artists and illustrators) and pasting them around or offering them to their local politicians.

We worked with “We Are Here” which is a group comprising refugees living in Amsterdam. Due to neither being entitled to social housing nor allowed to work, its members are often forced to live on the street. The group decided to make visible the inhumane situation in which they live, no longer hiding, but showing the situation of refugees that are ‘out of procedure’ in The Netherlands. Thanks to the collective power of the refugees and the help of many supporters, the group exists since 2012. (Source: http://wijzijnhier.org/)

Participate?
We have reserved thousands of posters, to spread and paste through cities in and beyond Europe. Check this link for print and shipment information and prices: Paper monument costs for pasters (given that we are a not-for-profit initiative, we ask for a donation for printing and shipping).

If you have information about potential co-distributors, poster pasters or other interested parties, please inform them by sharing this call.

The text continues after the pictures. 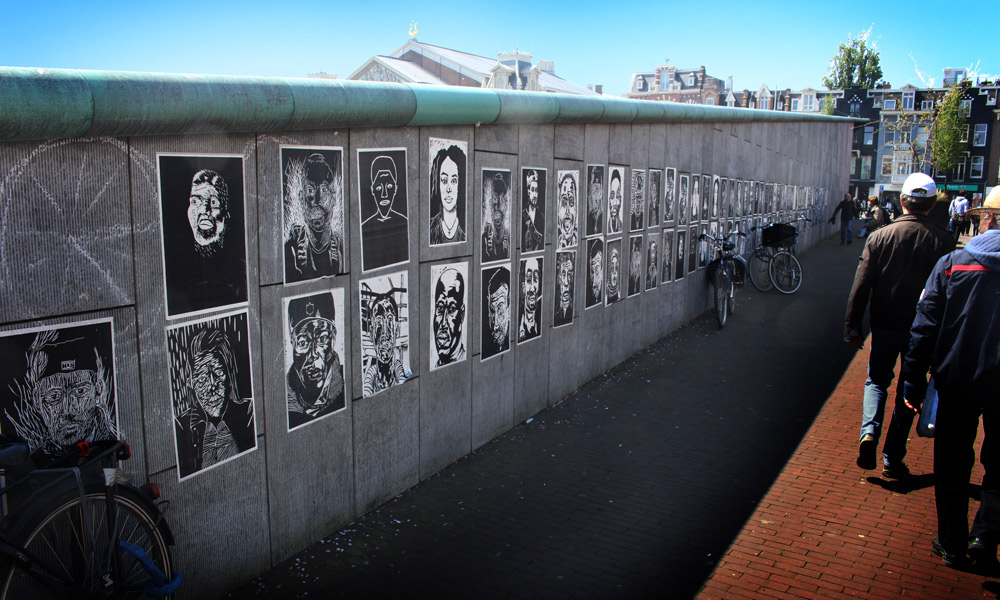 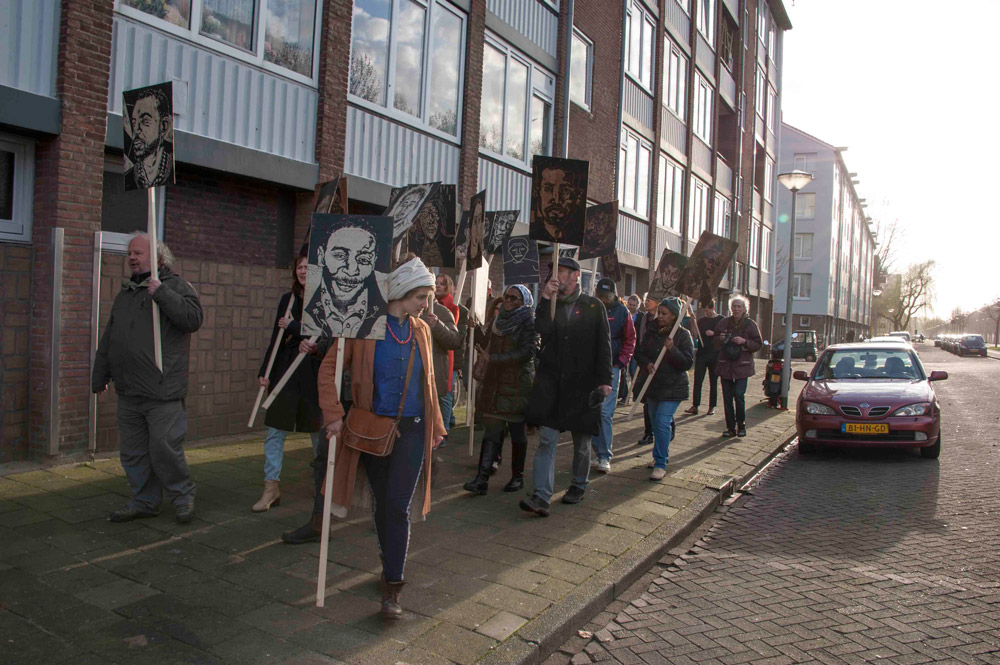 A paper monument for the Paperless
Together with a group of 19 artists, I initiated A Paper Monument For the Paperless, a series of 60 engraved in wood portraits of paperless migrants. Made for the purpose of printing in large quantities and pasting them up through the city streets. The project literally gives a face to undocumented refugees.

Undocumented migrants are seen as invaders, they are locked up in prisons and their individuality is stripped away. The portraits in their files are fleeting snapshots which are systematically, almost industrially taken. This paper monument does the opposite and gives warmth and time to the portrait. An artist’s hand, charcoal sketches and heavy engraving work oppose the chilly bureaucratic procedures. The paper monument portraits are spread through the city streets of Europe and beyond, so that passers-by are daily reminded of this group of people who live in anonymity.

The project mobilizes the street as its medium to critically explore freedom of movement and its curtailment. To activate its presence in public space, the project relies heavily on the engagement of citizens. They are stimulated to spread the posters through the city streets of Europe and beyond. The performative body therefore plays a crucial role in this work. The (illegal) distribution and pasting of the posters places the body in a vulnerable and at the same time activist position. It performs acts that are punishable, hoping to bring about social change and standing together with socially excluded communities. In this sense, it is a performance of civil disobedience.

As the initiator of this project, I gathered a group of 19 artists who made portraits in wood engravings. In terms of technique, I consciously chose for wood engraving because of the style unity and the rich social history. Wood engraving was already used at the beginning of the last century; from expressionism to political pamphlets. Figureheads Frans Masereel to Käthe Kollwitz made images in wood engraving to inspire people to start social change and to make invisible stories and realities visible.

‘A paper monument’ has the ambition to emerge from its temporary street context. In addition, there is a need for the story of the paperless to be included in our collective memory. That is why I am taking a new step in the development of the project: The search for institutional cooperation with ‘A paper monument’, by printing the woodcuts, in a limited edition, and offering them to public art collections.

In this way, this project grows from the underground situation with a lot of visibility on the streets to a paper ambassador who continues to tell her story as a ‘conversational piece’ within museums, archives and other collections of cultural heritage. 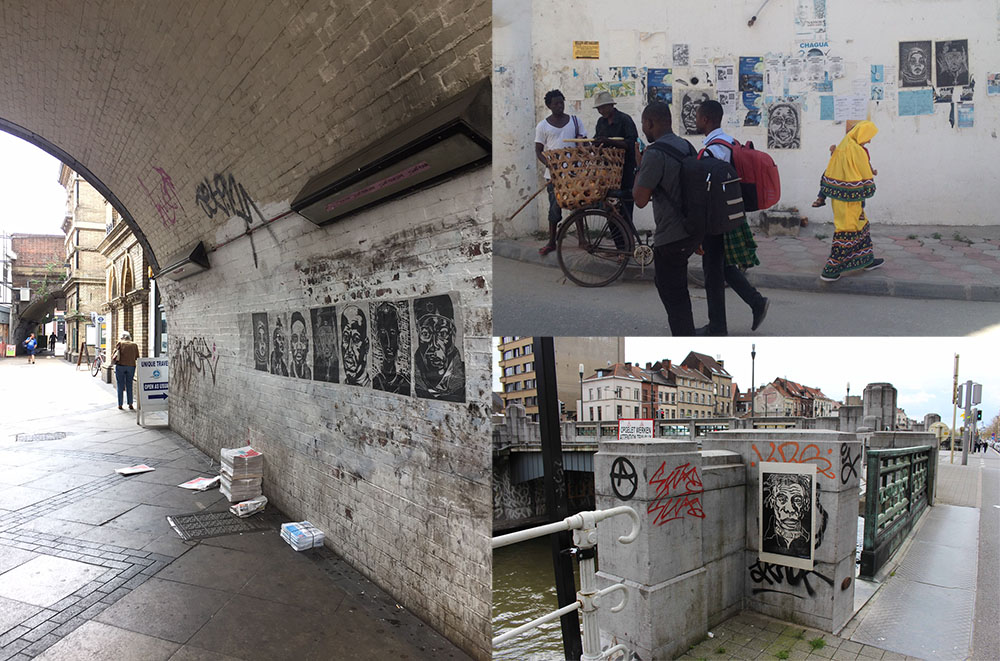 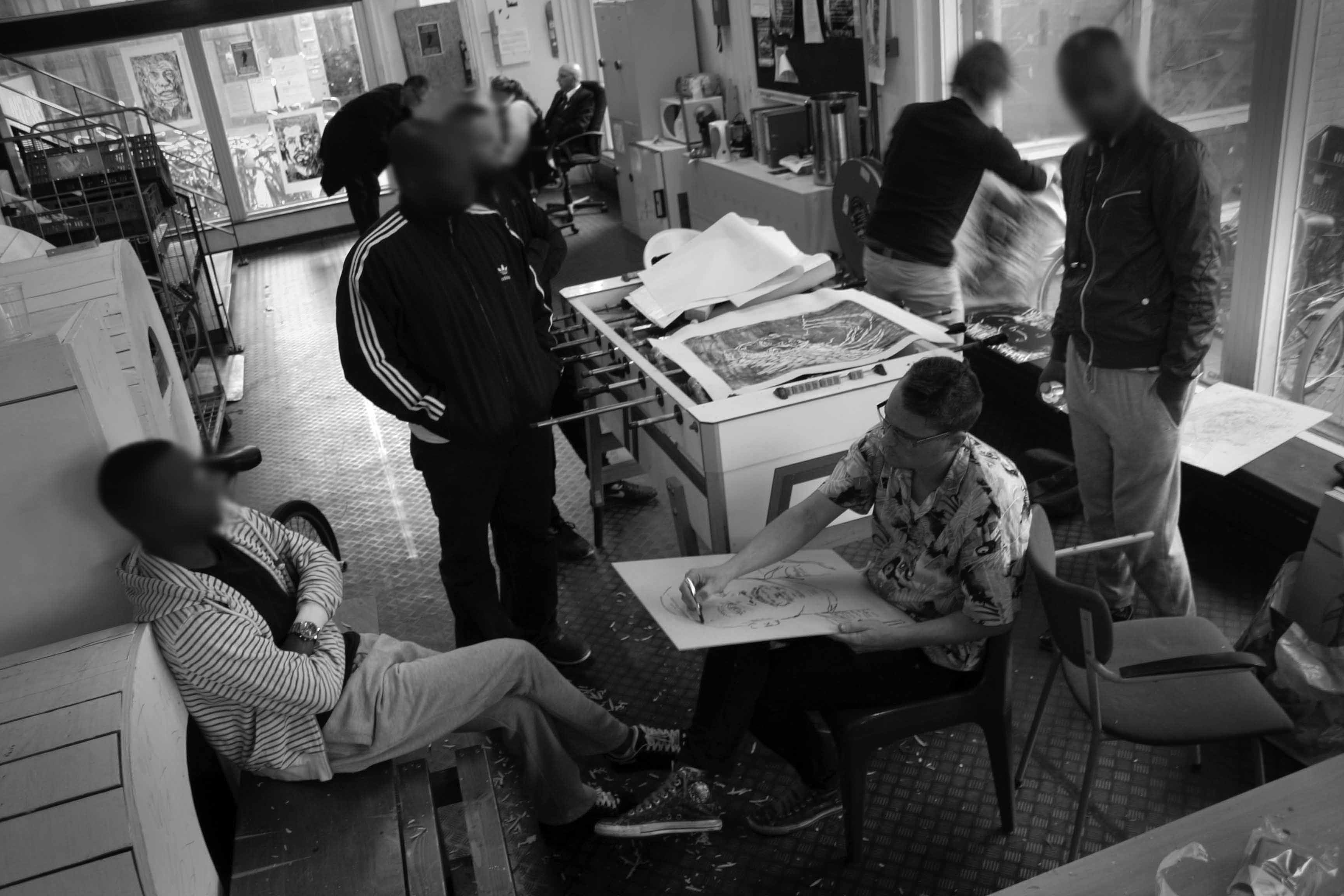 Woodcut workshop at Vluchtflat / We Are Here collective 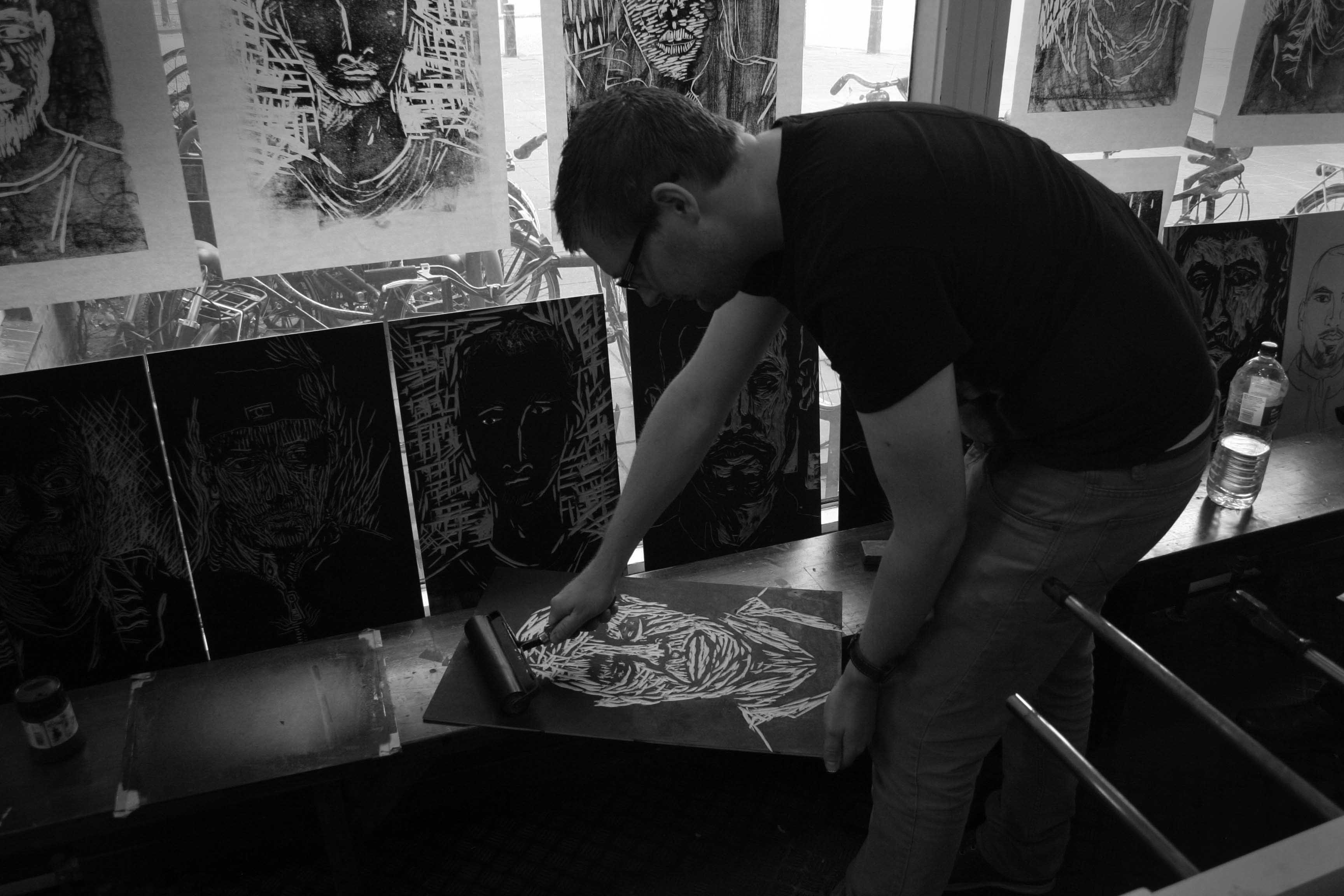 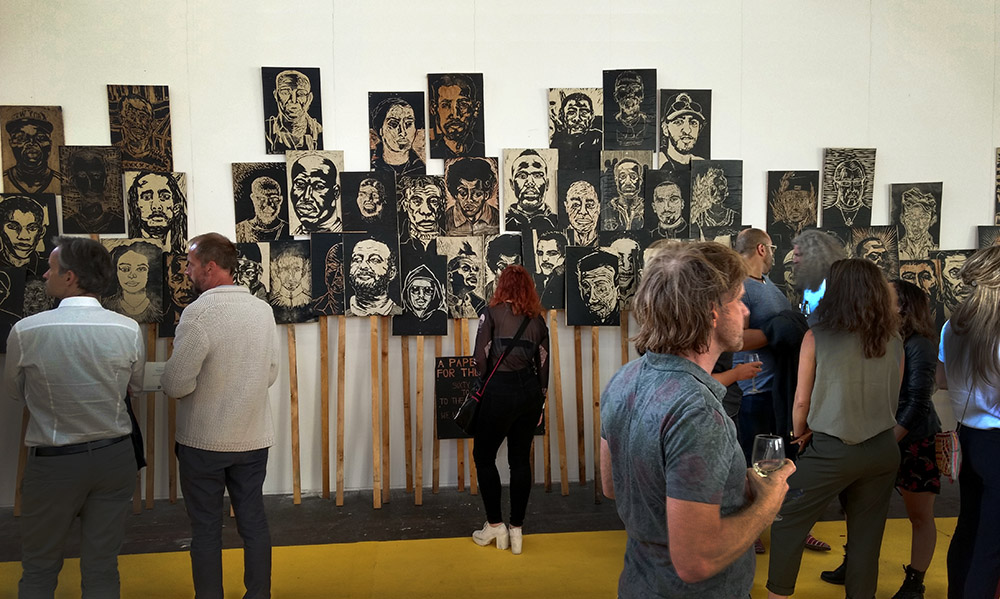