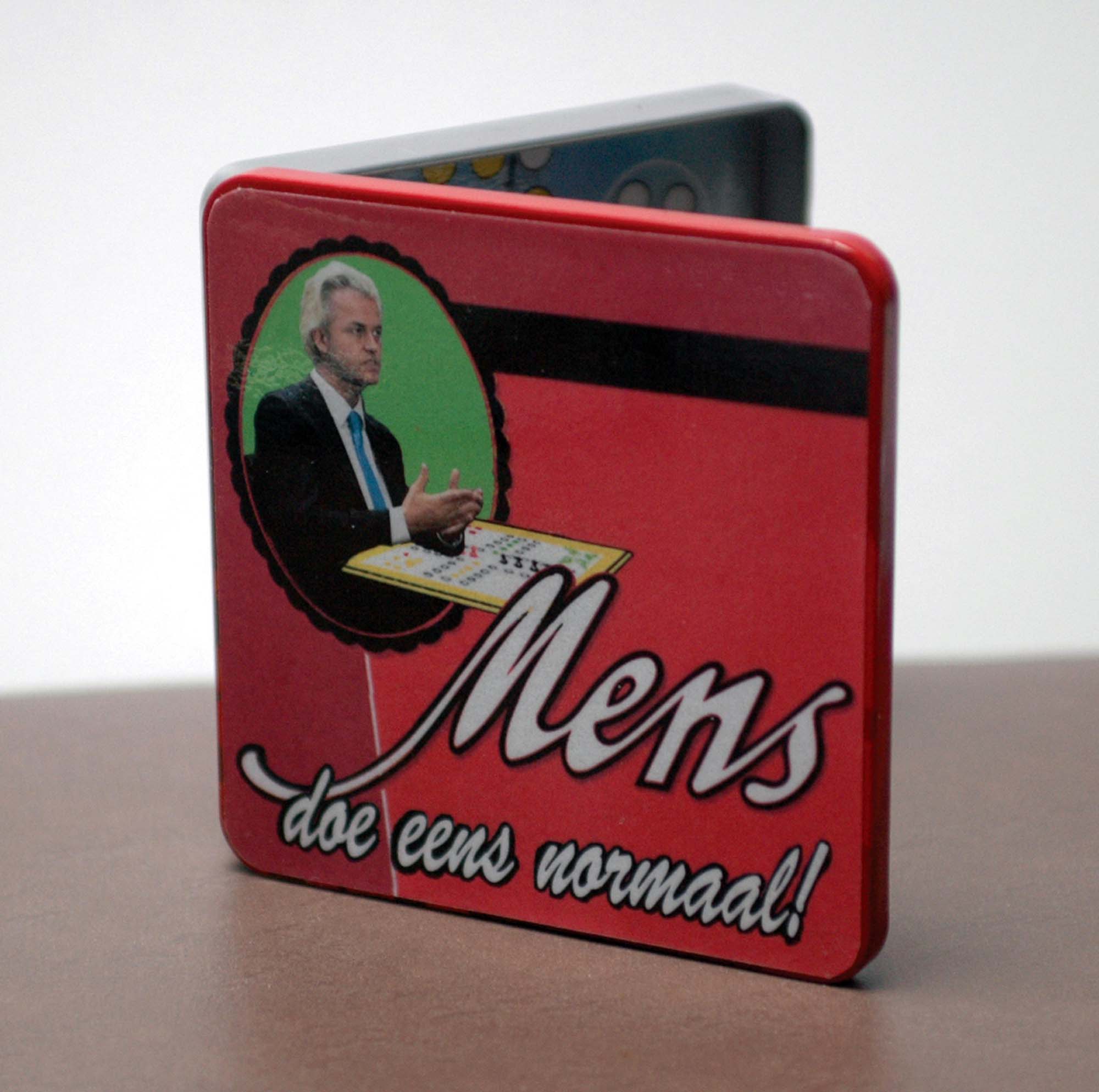 How to deal with the neoliberal demand that artists should be entrepreneurs?
It all started with the budget cuts in the arts in 2012 and the counter-demonstrations organized by the cultural sector. With my background in activism and some knowledge about the esoteric universal law of polarity, I knew that being against creates enemies, that polarising yourself counter polarises your self-chosen opponent, making a solution only more distant. An answer to tackle this could be a hyper-optimistic celebration of our opponent.

Wilderswebwinkel.nl is the artistic answer to cultural budget cuts; an online gallery with Geert Wilders as muse. Here we sell T-shirts, bags, duvet cover sets, and other pop-art Geert Wilders merchandise. All products are designed by visual artists and produced in small quantities. In this project, not only do artists adopt the cultural entrepreneurship promoted by the current cabinet but the Wilderswebwinkel.nl itself also offers a growing platform for artists to relate creatively to Geert Wilders and a way to apply his populist strategy to art. At the same time, the web store wants to bridge the gap between pro- and anti-Wilders by, for example, allowing people to welcome their immigrant neighbor with a Wilders doormat or use the PVV seagull (it’s 3D logo) at a birthday party as piñata.

“When the WWIK subsidy for beginning artists was cut back, I realized that I had to find another source of income. I had to show some cultural entrepreneurship and find a gap in the market. I also thought that art could do something more to ‘speak to the people’. Geert Wilders does well with ‘the people’ and is partly responsible for the cultural cuts. Art devoted to him could well be the solution to both problems: generating income and building a bridge to a new audience. The fact that we knew how to speak to the people was obvious: we are the first artists who have been positively portrayed by tabloid television station Powned.” 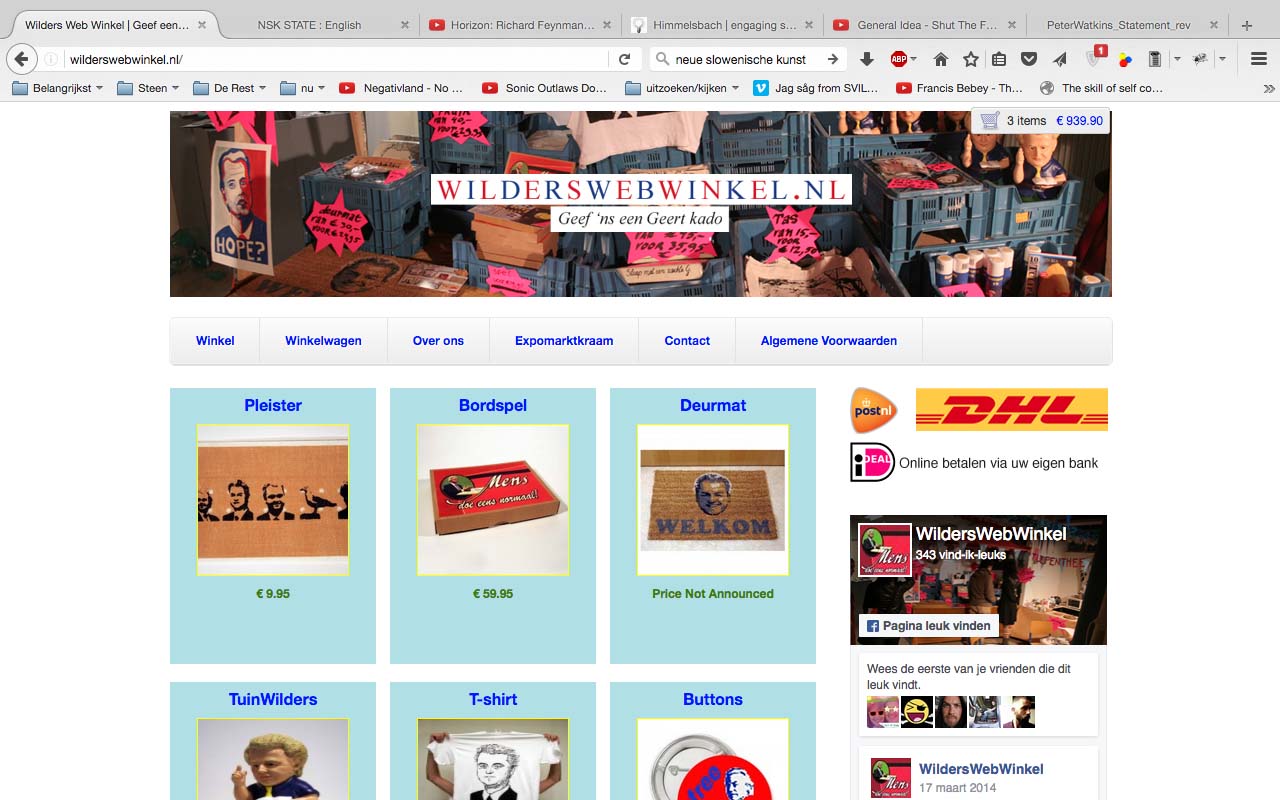 Actions like Wilderswebwinkel are impossible to capture in pictures, it’s all about context. For me this project is about a story of alchemical self-transformation. First my heart was lightened with anger and fire. Instead of losing my energy into conflict I turned the energy into a positive outcome.

The core of the project is that for a half year I made Geert Wilders products, day in day out I drew his face, sculpted his bust and, when I collected enough products, I built a webshop and toured with a market stall through the Netherlands, from world music festivals to Volendam, and so this politician lost his meaning for me.

It’s like what the market does with subversiveness: selling Joy Division t-shirts at H&M transforms the band into an empty logo. If somebody enlightens your heart with hate, I would suggest this love and kindness and hugging him until he can’t be against you anymore.
Wilderswebwinkel is my most misunderstood and counter-intuitive idea, which I celebrate as the most radical means through which to deal with political polarisation.

Though the concept and most of the production of this project was organised by me, I couldn’t have done it without the help of my fellow social designer Tabo Goudswaard who conspired with me to kick the initiative off andChiel te Bokkel, Hajo, Robin de Kruijff , Marianne Kaars Sijpesteijn, Jitse Schuurmans, Trik, Finbar van Wijk who enridged our gallery with their beautiful authentic Dutch craftsmanship. 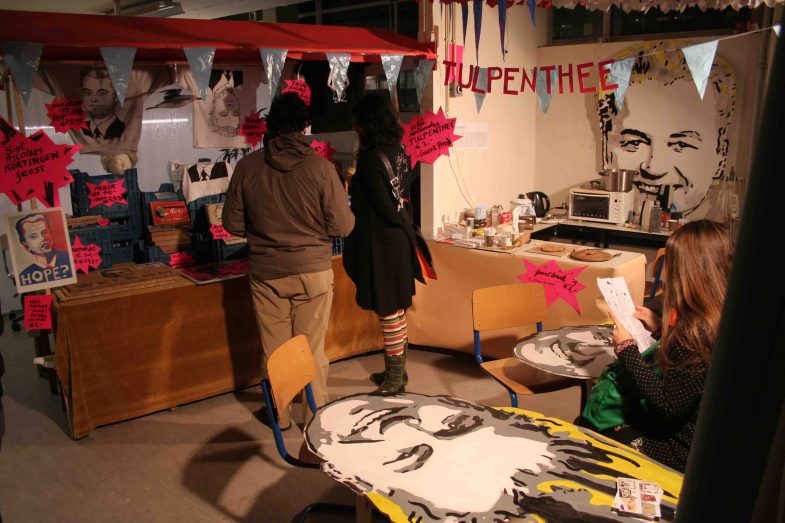 The following text is written by Gabrielle Kennedy /asdf 29-11-2012 for http://www.design.nl/item/wilders_web_shop

Domenique Himmelsbach de Vries  started the Wilders Web Winkel (Wilders Web Shop) as a creative reaction to the now infamous arts funding cuts that have cut the Netherlands’ cultural sector at the knees.

“I didn’t like that the cultural community were acting and responding to the issue like victims,” Himmelsbach de Vries says.  “I did not think it was the best way to handle the whole situation. I started thinking that they wanted us artists to go to market and to make money.  They go on and on about cultural entrepreneurship.  Of course the biggest visual symbol of this anti art sentiment is Geert Wilders’ face.  He famously called art a left wing hobby of the elite … so of course it is logical to try to make money off his face.  I have embraced him as my milk cow.”

The Wilders Web Winkel brand comprises merchandise like t-shirts, bandaids and bedsheets designed by Himmelsbach de Vries.  Other products like garden gnomes and foot mats are designed by others who believe in the cause and are also available on the webshop.  The products are mostly silk screened and finished by hand in Himmelsbach de Vries’ Amsterdam studio.

His interest in social design stems back to his education.  Even as a student he was plastering billboards with his own posters claiming “I am engaged with your misery”.  After graduating from art school he earned a Masters in social design from the No Academy – a programme with no specific geographic location offered to artists and designers whose work articulates a social consciousness.

Himmelsbach de Vries never wants to get stuck in his studio – designing for problems from afar.  “I see that approach as part of the problem,” he says.  “Too many players from politicians down are totally disconnected from the issues they are passing laws and policies about.  They have no clue what it actually feels like to be in these situations.  I think the best I can achieve is to create work that is genuinely engaged, not just objects to look at.”

While at No Himmelsbach de Vries got the chance to work with everyone from renting agencies to city archives.  “These people I encountered have real access to the community, but have no real way of genuinely connecting with it,” he says.

Local media and other organizations started noticing how Himmelsbach de Vries – a designer with no agenda –  was able to nurture the type of communication they needed but could not achieve.

Now groups form Belgium and Denmark have approached him to use his Wilders concept for their own right wing populist demagogues.   “It is really just about how artists can make money by milking politics,” he explains.

Himmelsbach de Vries will continue with social design or what he also calls artistic research.  “What I do is ultimately about creating stories that inspire people,” he says.  “Finding a new archetype that people can relate to outside of Facebook.”

With that said one can access him on Facebook.  And Wilders Web Winkel is also currently exhibiting in the Kunstvlaai in Amsterdam until December 2nd.  Other designers with work that suits Wilders Web Winkel are invited to contact Himmelsbach de Vries.